This plan was developed by a multidisciplinary project team who convened at four workshops from 2011- 2013 to increase effective
management of Hawai‘i’s marine protected areas.  The project team used Conservation Action Planning
(CAP), a powerful process to guide conservation teams to develop focused strategies.
Download a Full Copy of the WHCCAP 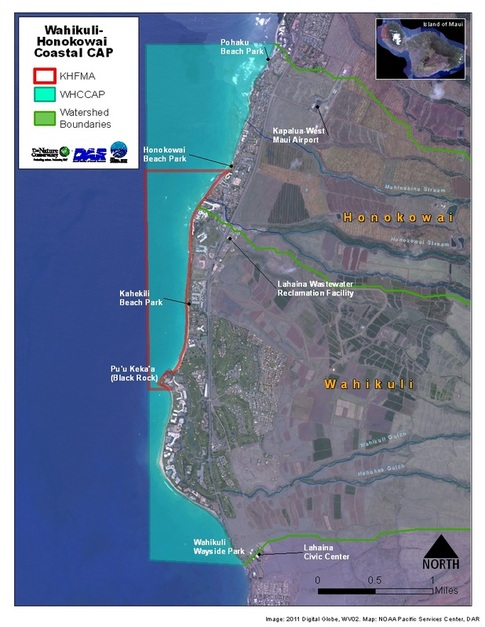 Concerns over sediment runoff and algal blooms in this area date back to the 1960's.  Despite several management plans, nuisance blooms of red and green algae continued on shallow reefs and deep waters at Kahekili Beach Park through the 1990's and 2000's.  Algae blooms have several negative ecological impacts by 2009, coral cover had declined 20% in 10 years.

In 2009, the Kahekili Herbivore Fisheries Management Area (KHFMA) was established to prevent further coral decline by protecting herbivorous fish that eat algae.  Preliminary results suggest a successful increase in surgeonfish and parrotfish biomass as well as the number of larger fish in the KHFMA.  However, more conservation action is needed to revive and restore the coral reefs in the Kāʻanapali area.

What we are protecting

The WHHCCAP focuses on improving the status of the coral reef ecosystem.  The focal area contains 1,000 acres of coral reef ecosystem comprising 70% of the total CAP area.  Reef herbivores (including parrotfish, surgeonfish, and sea urchins) were also identified as a community that would be conserved by preserving the coral reef.  On a four-part scale from poor to very good, the current status of the coral reef in the CAP area was ranked as "Fair".  This document outlines strategies to raise this status to "Good".

Threats to the coral reef ecosystem: 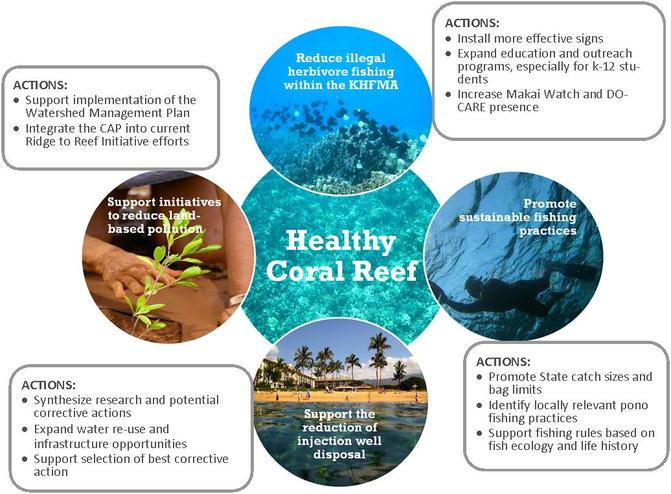 For more information, contact the CAP coordinator at hicoralfellow@gmail.com